Fishing for trout on the Manistee River near Tippy Dam from the angler’s point of view.

Wintertime fishing on northern Michigan rivers usually means steelhead to most diehard anglers. Fishing pressure is low, the rivers have a beautiful serenity about them, and it’s just an awesome time to be out on the water chasing steelhead that are spending their winter in the rivers.

Not to be overlooked, however, is the amazing trout fishery that we have on the Manistee. Sure, they probably won’t break any records for size, but what they lack in that category, they more than make up for in scrappiness, willingness to bite, and beauty. Not to mention that they’re just plain fun to catch on light tackle.

The Michigan DNR stocks tens of thousands of brown trout at Tippy Dam on the Manistee River each spring, and these fish grow to be anywhere from 10-15 inches by wintertime. And this doesn’t take into account the trout that have been stocked in previous years. Fish over 20 inches aren’t uncommon. Steelhead smolt and resident rainbow trout are also in these waters. For a fun day of fishing, this is an amazing fishery, and when other species aren’t biting, the trout bite can be downright hot! Experienced anglers and novice anglers alike can benefit from a fishery like this, and we at Wolfe Outfitters feel blessed to have this fishery in our backyard!

On a recent chilly December day (ok, it was downright cold—10 degrees to begin the morning), one of my fellow Wolfe Outfitters guides and I headed down to the Manistee River to get in on the trout fishing. After all, what do guides do on a day off? We go fishing! Taking a two-pronged approach, I had a jig and waxworm setup (also a key steelhead option for winter and spring) while my fellow guide, Jeff, had his fly rod with a couple of prototype flies to try.

Launching the boat at Tippy Dam, we headed out to some likely looking holding water. Jeff brought his 4-weight rod, which is perfect for the brown trout that hold in this water. I had a medium light 10-½ foot baitcasting rod with which I love to float fish for trout and steelhead. It took us a little while to dial in exactly where the trout were, but we found them. Tucked bankside to a seam in the river just below a gravel bar, we found the perfect spot to cast—both with my jig and waxworm setup, and Jeff’s prototype flies. Multiple doubles became the norm in the scant 2-½ hours that we fished. Needless to say, the waxworm program worked extremely well, and Jeff was thrilled to find a prototype that needs to be included in the regular rotation! “I guess I’ll be spending some time tying up a lot more of these!” he said as he grinned.

I don’t know of too many places where an angler can go have fun on a river enjoying a fishery like the Manistee River just below Tippy Dam. Spring, summer, fall, and winter, the brown trout fishing is dynamite. It’s a great place for anglers to learn a new technique, or to just have fun like Jeff and I did. The trout won’t win prizes for size, but they certainly should for putting a smile on people’s faces. They are truly beautiful specimens that have a tenacity and scrap to them that makes them a hoot to fish for. Fly fishing or conventional gear fishing techniques both work, and with a numbers fishery like this, who can complain?!! 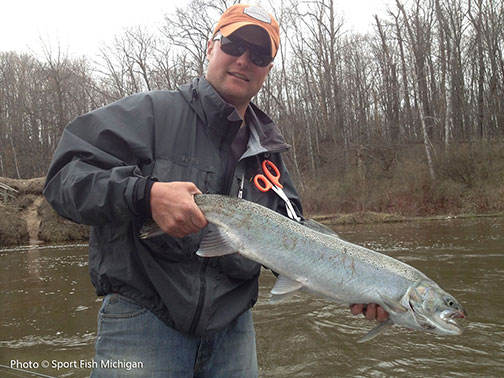 This coming Saturday is the opening of the deer season for many who hunt, and the woods will be full of people anxiously hoping for a shot at a trophy buck. A couple of recent snowfalls have hunters giddy with anticipation. Indeed, this is a great time to be hunting in the beautiful state of Michigan, as the woods and waterways are full of life. Ducks and geese are plentiful as they head south for the winter. Squirrels are busying themselves for the winter, foxes are calling out to mates, bears are on their last few feeding binges before bedding down to hibernate, and turkeys are abundant, scratching the ground for a morsel. And then, of course, there are the deer. Lots of them.

Despite much of the attention for the outdoor enthusiast now being focused on hunting, this is still a wonderful time to be on the water. Lake or river, there are some terrific options, and competition for a fishing spot is almost non-existent.

Steelhead are in the rivers now, and where it’s still an open season, such as the lower Manistee River below Tippy Dam, the trout bite is fantastic this time of year. Rainbows and browns gorge themselves in preparation for the winter, and anglers can have lots of fun targeting these beautiful and scrappy fish. Lake run brown trout enter the rivers to spawn, as do lake trout in certain systems. Cured or fresh salmon spawn tied into spawn bags will get bites from all of the species just mentioned, and when the bite is on, it’s easy to run out of spawn bags. Light jigs tipped with wax worms can also be a great option when fished under a float.

Those anglers preferring to fish the numerous inland lakes here in northern Michigan have great options as well. Perch are biting this time of year, as are most of the predatory species like bass, pike, and walleye. Walleye fishing is getting better and better as the days shorten, providing great opportunities for anglers fishing at early light and the last light of the day. The same goes for pike. Bass tend to feed a bit better after the sun goes up a bit. Blade baits, like the Heddon Sonar, can score extremely well this time of year, and it’s not uncommon to catch walleyes, perch, and pike on these baits as well. Whitefish begin to come shallow on waters like Grand Traverse Bays, and even though the lake trout season is closed on the Bays, it’s very possible to hook one of these fun fish while fishing for whitefish. Just throw them back to stay legal! Whitefish bites are usually very light, but well worth it for this outstanding tablefare.

The fall feed is on, and the bite can be downright hot, despite some of the colder temperatures associated with the opening of deer season in Michigan.

Some days, we cast and hook up on seemingly every cast. Other days, it’s like we’re casting in a dessert, expecting to hook into a camel. Fishing. Why do we do it—well, I think we have to be optimists to get ourselves out the door. Sure, fishing in a dessert is part of the game, but we, as anglers all hope for those days of “stupid fishing”, when no matter what we do, or how we do it, we get bites. Those are the fun days, no doubt about it! And they’re also the days that our arms get tired from catching, and not just fishing. That being said, however, these are also the days to not only enjoy to the fullest, but to learn.

It’s during a hot bite that I experiment with off-the-wall ideas to see whatever else works. Not only does this eliminate dud ideas, but can help hone techniques and bait presentations, giving us confidence in these techniques when we encounter the dreaded tough bite days.

Such was the case the past several days. Most of July and August, we here in northern Michigan, experienced very little rain, leading to extremely clear, low water conditions. The past 2 weeks has had a lot of rain. In fact, the past week has had well over 6 inches of rain, leading to very high, muddy flood-stage water levels on all of the area’s rivers. The Big Manistee River was no exception.

Higher water levels on the rivers in the fall lead to fish such as salmon and steelhead to enter the rivers to spawn. Low clear water, by contrast, makes fish wary, and makes the spawning runs meager and not as predictable. High muddy water makes fish a little more predictable, but not necessarily any easier to catch.

The past few guide trips on the Manistee River has been like trying to fish in hot chocolate. Muddy, lots of leaves and debris floating down river, and fish on the move up to Tippy Dam. Under normal conditions, the steelhead that come into the river in October stage in various holes and runs as they meander their way up to the dam, where they spawn. High, muddy water forces fish out of their typical routine, keeping them on the move. As anglers, high muddy water must force us out of our typical routines as well, making us fish water that we might not typically, looking for the shallower runs that fish use as they move up river.

The bite was extremely tough during the highest water. Most tactics didn’t get a lot of bites, but we did manage a few. By putting the right presentations in front of inactive fish, we were able to get a few to react positively. Whether it was out of hunger, curiosity or aggression—at the end of the day, it doesn’t really matter—we got some bites. But paying attention to cues that the conditions give us can help trigger some of these bites. 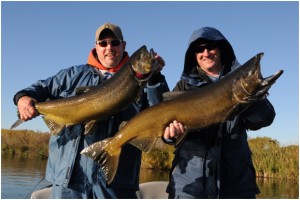 Rich and David with early morning late-season king salmon. We have no idea if the early bird got the worm, but these anglers got the fish!