Recognition – at last! And every bit of it deserved!

Bassmaster Magazine and Bassmaster.com, the publications of B.A.S.S. just published the 2014 listings of the 100 hottest fisheries on the planet, and it feels like redemption for those of us that fish Grand Traverse Bays. Coming in at number 9 on the list of best fisheries, Lake Michigan’s Grand Traverse Bay even topped last year’s champ: Lake St. Clair. Now that’s what I’m talking about! 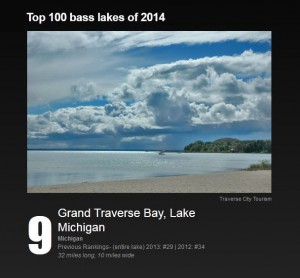 This is exciting news to everybody who loves northern Michigan, and has been highlighted on several radio news broadcasts, as well as on the 9 & 10 Television News. On their May 1st Hook and Hunting segment, 9 & 10 News asked me for my thoughts on what this means to the Traverse City area, and what makes fishing on Grand Traverse Bay so special.

Naturally, the answers running through my mind were many, but with a limited segment, time only allowed for the boiling down to the “best of.” Here are some of my thoughts on the Bays ranking number 9, and what it means to northern Michigan: