Sport Fish Michigan’s boats have been equipped with Smooth Move Seats to enhance our customers’ experience. Smooth Move Seats vastly improve the comfort of riding in rough waters, are sleek and easily adjustable, and have proven to be a game-changer!

Captains Ben Wolfe and Eric Long enjoy a fun and successful day of Walleye fishing on the St. Clair River in Michigan.

Captain Ben Wolfe explains how to use the highlight function on the Helix 10 Humminbird unit and how this function can be helpful. 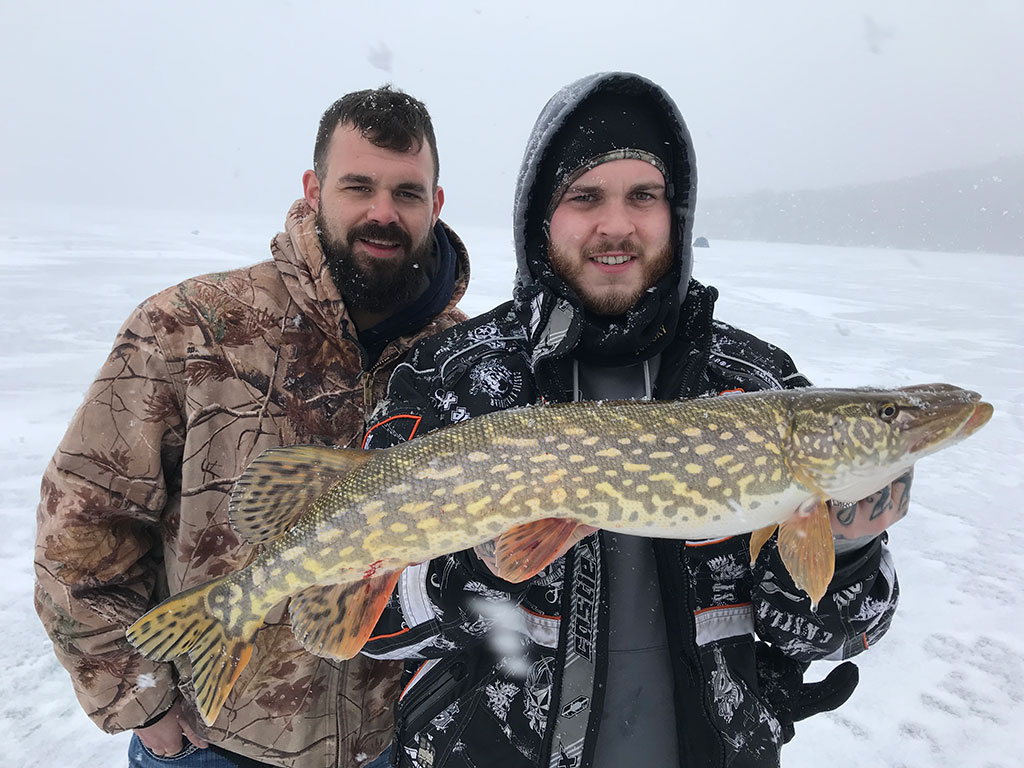 2018 has been fantastic so far, with lots of safe ice on almost every body of water. This has allowed us to take our guide customers to many different inland lakes to target a wide variety of fish species; yellow perch, walleye, lake trout, northern pike, crappies and bluegills are among the most common.

Guided ice fishing is becoming more and more popular, and in 2018, a few more guide operations popped up. Sport Fish Michigan began offering guided ice trips back in 2013, and we are proud to have an experienced, outstanding operation. We have been featured on the local news, in national print magazines, and on television shows in addition to our own online productions.

From the seasoned ice angler to the novice who has never been out on the ice before, Sport Fish Michigan’s Guides work hard to give each and every customer the best experience possible. We tailor each trip to the customer’s desires and needs, and strive to provide a fun, safe, and comfortable atmosphere in which to enjoy your day on the water.

There are a few differences that set Sport Fish Michigan apart from some of the other guide services that exist around the state. First, all our Guides are licensed and have a U.S. Coast Guard Captain’s license. Whether we are guiding on inland waters or navigable waterways like Lake Michigan, Grand Traverse Bay, or Lake Huron, we feel that it is important that each customer fish with a Guide that has the highest credentials possible. Every one of our ice guides is passionate about ice fishing and is more interested in helping our customers catch fish and have a good time than they are in catching fish themselves. We love to teach what we know and pass along our years of ice fishing knowledge to our customers. And we are also always trying to learn as well. We constantly try to improve and look forward to each trip as an opportunity to not only teach, but to learn as well. Each one of our Guides is also a people-person. We look forward to spending time with our customers, and thoroughly enjoy our time on the water with them. Fishing is so much more than just catching fish: it’s supposed to be fun, too, and we strive to always provide an enjoyable atmosphere. 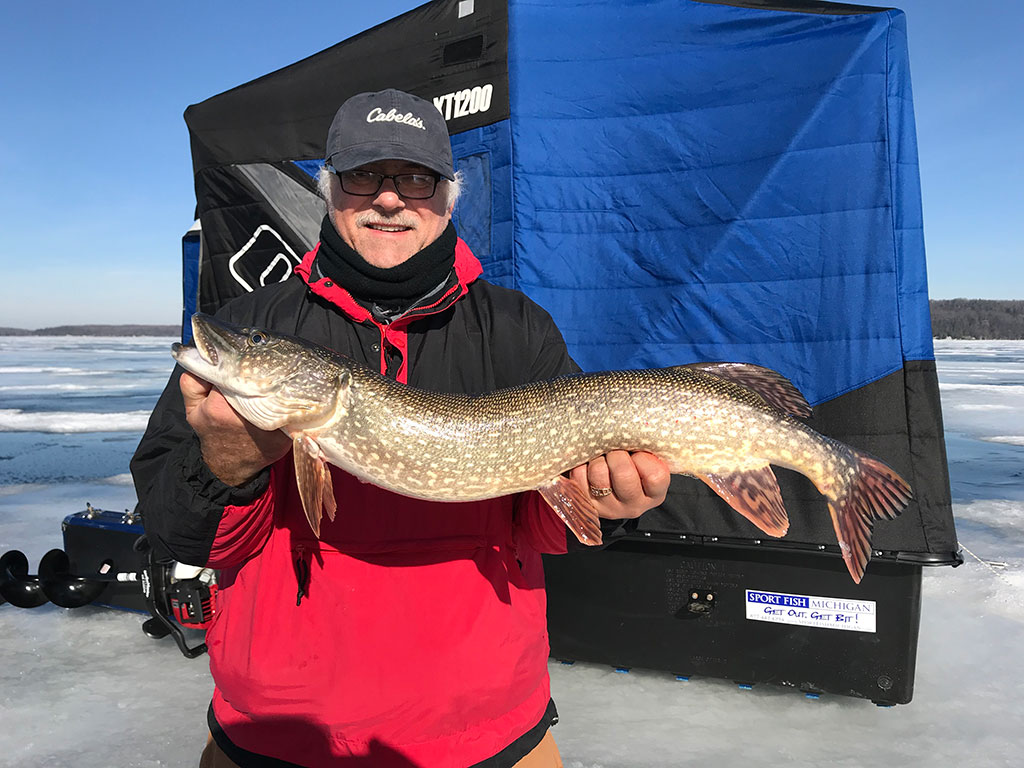 Our equipment is another thing that sets apart. We use what we feel is the best equipment available to help our customers enjoy their experience: fully-insulated Otter Outdoors pop-up or flip-over shanties equipped with Humminbird Ice Helix graphs for customer use, as well as MarCum Technologies or Aqua Vu underwater cameras. We provide it all! Each shanty has a heater inside, so that no matter how cold it may be outside, it’s nice and toasty warm inside the shanty. The rods and reels we provide are all in tip-top shape, rigged, and ready to go. We love the 13Fishing ice rods and pair them with a Shimano reel. We also provide transportation on and off the ice when safe and practical. We transport our customers using a Polaris Ranger Crew UTV, a Polaris 4-wheeler, or via Ski-Doo snowmobile. Ice and snow conditions dictate which vehicle we will use for transportation, but our goal is to provide as much luxury, comfort, and safety as we can. “Show up and fish!” is how we try to run things at Sport Fish Michigan. Let us do all the work: setting up your shanty, drilling the holes, getting the heat on, setting up the electronics or cameras, and even getting the tip-ups set before customers even arrive. Many times, there is a flag on a tip-up by the time our customers arrive on the ice!

We have worked hard to provide the kind of ice guiding service that we have become and are proud of our results. Our customers are our proof. We have been fortunate to have customers from all over the country, as well as some from out of the country—as far away as Brazil and Puerto Rico! When customers travel to fish with us from out of state or country means that our customers are committed to us, and we are always just as committed to them. For those of you that have fished with us in the past, thank you. And for those that have not, we would truly enjoy an opportunity to do so in the future! 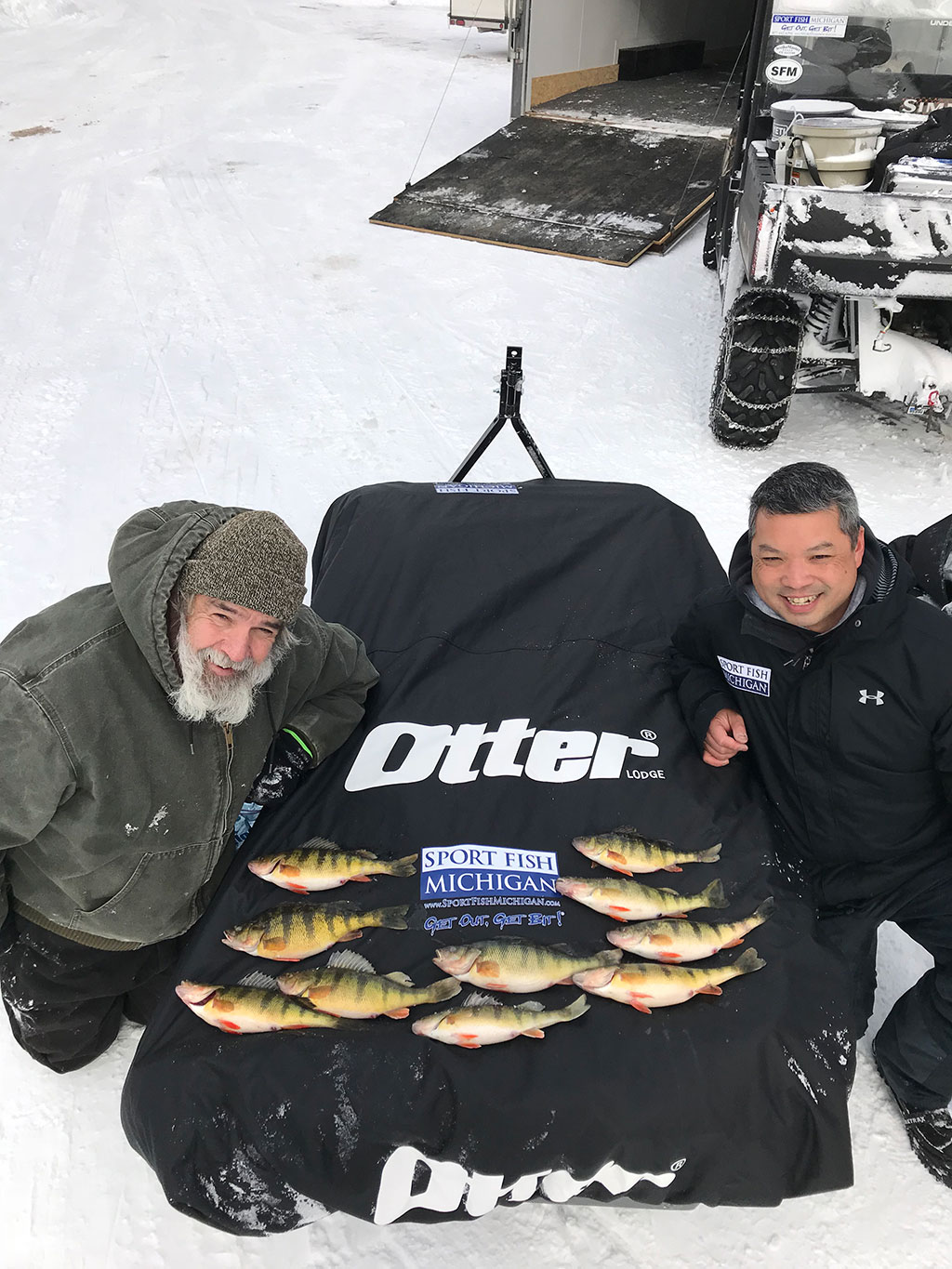 Michigan’s beautiful rivers yield fantastic opportunities for anglers throughout the fall and winter. Steelhead are our favorite to target during these seasons. They are active fighters – their fast runs and jumps create excitement and fun for river anglers.

Michigan has a plethora of fish species to target, and many anglers only target yellow perch through the ice, choosing to target other species during the warmer months. But yellow perch are a tasty panfish that can be successfully targeted and caught year-round.

Yellow perch are roamers by nature, most often gathering in schools. They can be here one day, and gone the next, having moved on for no apparent reason. They can congregate in huge schools, eating aggressively as they go. A highly adaptable fish, forage for perch can be extremely varied. Seemingly everything is on the proverbial table as far as forage for perch; round gobies, various minnow species, shiners, crayfish, mayflies, wigglers, scuds, freshwater shrimp, worms and more are all fair game for perch. Thus, tactics for catching Michigan’s perch can be extremely varied as well.

Many anglers stick with a typical perch rig with two hooks, either threading live wigglers or minnows onto the hook. This is a tried and true technique, and can often be the ticket to a great day’s catch. Another fantastic option on this perch rig is a piece of cooked shrimp. Some days, the bigger perch really seem to have a preference for wigglers, minnows, or even shrimp. Having all three onboard can pay dividends when the bite gets fussy. The tried and true isn’t always the rule of the day, however, and a variety of other techniques can sometimes lead to an undiscovered bite, or target larger fish.

One such technique is a jigging spoon. Not just a winter-time technique fished through the ice, a jigging spoon can often target the biggest fish in the school. There’s something about the erratic flutter, fall and flash that can really trigger big jumbos to bite. Cast and retrieved in a yo-yo lift-fall manner, perch respond very well to this lure. Also, jigged vertically below the boat when the school is directly below can be another great option with jigging spoons. Jonah Jigs in ½ ounce, ¾ ounce or even 1 ounce are what are most commonly on Sport Fish Michigan’s boats when employing this technique. While jigging spoons are not often the best way to target numbers of fish, they can often trigger the biggest in the school, and even call in roaming packs of jumbos. Similar to the jigging spoon is another option most often employed during the ice season – Rapala’s Jigging Rap. Many lures make similar offerings, but Rapala’s Jigging Rap is probably one of the most prolific fish catchers of all time in this category. That being said, there are many other lures in this category that all catch plenty of fish. Moonshine Lures’ Shiver minnow, the Acme Tackle Hyper-glide, Northland’s Puppet minnow, Custom Jigs & Spins Rotating power minnow, and Lunkerhunt’s Straight up are just some lures in this huge category. These options can be fished vertically or horizontally cast and retrieved and at times can lead to fantastic catches of not only perch, but also walleyes that may happen to be in the area.

While many waters hold impressive perch populations, some waters have a better tendency to grow true jumbo perch stretching 12 inches or better on a regular basis. Lake Erie has been long established as not only a walleye factory, but also great for perch. Lake St. Clair is another big body of water known for outstanding perching. Further to the north, Saginaw Bay is yet another body of water probably better known for its walleye fishing, yet hosts an impressive perch fishery. Further to the north still is the Grand Traverse Bay area. Here, many inland lakes support a prolific fishery for jumbo perch, and the Grand Traverse Bays are in the midst of a major comeback in perch numbers and size. Towards the tip of the lower peninsula lies Burt Lake, another incredible lake for a variety of species with perch certainly amongst them.

Certainly, there is no shortage of spectacular lakes here in Michigan to target yellow perch. From young angler to older angler, they continue to be a crowd pleaser. On the water, and on the ice.

Northern Michigan offers world-class bass fishing. The fall season is a great time to fish for bass with one of Sport Fish Michigan’s experienced Captains!